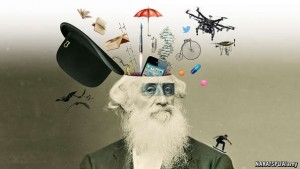 This picture illustrated the cover of the August 8th-14th 2015 issue of The Economist. In the leading article (p. 9 and here), The Economist takes a clear position: “Time to fix patents“. “Ideas fuel the economy. Today’s patent systems are a rotten way of rewarding them. ”

For the economists of The Economist, the patent machine is thus broken, it is no more fit for its purpose: to encourage innovation by ensuring an appropriate reward. Also, it is not fit for another aim: spreading knowledge. (This should result from the mandatory publication of patents). Because the patent system is no more fit, a (legal) fix is hardly needed, so goes the argument.

The Economist starts by noting that broadening the scope of patents in agriculture and in other industries has not lead to more innovation, more research or more revenues. (But what does ‘broadening’ means?).

The article also underlines the territorial expansion of a ‘strong patent model’ by referring to the adoption of the Trans-Pacific Partnership, a trade agreement covering one-third of world trade, recently signed and discussed here on IPdigIT. The territorial spread of the patent model at least seems to attract foreign investment. Thus the strenghtening of patents, as illustrated by Taiwan’s 1986 patent reform and its consequence on the economy, arguably contributes to divert investment and R&D to the ‘strong patent’ territory, but with no insurance that the overall amount of innovation worldwide has increased.

The complementary article of the August 2015 issue, A question of utility, goes more into details about the deficiencies of the patent system and relies on the now classic work of two economists, Michele Boldrin and David Levine, Against Intellectual Monopoly (Cambridge U.P., 2008).

The article does not advocate the abolition of patents altogether – what The Economist did back in 1851, as recalled here -, but their limitation. The article claims that government should force patent owners “to share” as sharing “brings huge benefits to society” and “leads to extra innovation”. Sharing is a nice program, but it remains to be seen whether and how it can be imposed by law.

Even in the pharmaceutical sector, where the support for patents is still very strong as the need to reward huge investments in R&D seems widely shared, the history of patent law, for example in Germany till 1967, teaches that patents have not necessarily resulted in more innovation (see also the Bayer story about aspirin here). Therefore, the argument that patents should be replaced by prizes is worth considering, as Paul Belleflamme did here.

Away with the patent horror picture show

How to fix patents? Discussing the proposals to reform the patent system

Among the reform proposals listed by The Economist, could you discuss and possibly challenge the following suggestions:

I would like to read your responses to the questions listed above, bullet point after bullet point.

You might have a look at the comments and reply of some lawyers and economists to The Economist‘s article on the IPKat website (see here and here).