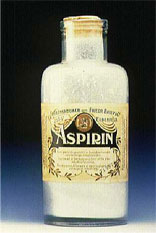 ‘The serial painkiller’: this is how the Financial Times (27 oct. 2011, see here) describes the history of aspirin, the well-known medicine invented more than a century ago, when Bayer’s chemist Felix Hoffmann synthetized a stable form of its active ingredient.

Aspirin is undissociable from Bayer, but the benefits of its active ingredient were apparently known since the ancient Greek which used the leaves of the willow bark as a fever fighter. Those leaves contain a substance called salicin a natural compound similar to acetylsalicylic acid, the chemical name for aspirin (see here for the history of aspirin). ‘Aspirin’ itself is derived from “a” for acetyl, “spir” from the spiranea plant (a source of the ingredient) and “in”, a common suffix for medicines when the product was put on the market at the end of the 19th century.

Aspirin is still a blockbuster today: in 2010, Aspirin generated €766m in sales for Bayer. For a long time, Aspirin is however no more protected by patent. This makes Aspirin quite special, and probably the antithesis of the common story of modern drugs which generate huge profits during the short life-time of  patent protection, before being overthrown by generic rivals. In addition, Aspirin lost rapidly its trademark protection. “During the first world war, explains the FT, the company’s trademarks – Bayer and Aspirin – were expropriated in the US, France, the UK and much of the British Commonwealth, who were allies against Germany“. The company nevertheless managed to get back the protection of “Bayer” – in the US, not until 1994 apparently. This made it possible to get a trademark protection for the combined words “Bayer Aspirin”. Aspirin however remains a leading illustration of a trademark which, due to its success, lost protection when it became the generic word to refer to the product itself.

In the FT article, the following reasons are put forward to explain the lasting success of Bayer Aspirin despite the loss of IP protection: on top of the consistent investment in getting back some form of trademark protection, the regular expansion of aspirin’s medicinal uses (it is now approved to protect against repeat heart attacks and strokes; see the promotion on a US website under the (trademarked) motto “Expect Wonders” here), the periodic reformulations (from tablets to powder, and its association with other ingredients as in Cafiaspirina, where it is mixed with caffeine) and the intensive marketing of the product. 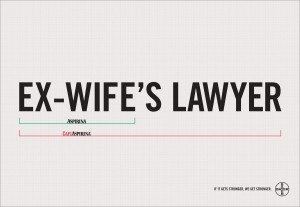 Aspirin has  inspired some imaginative advertisers, for instance in Brazil — an ‘ex-wife’s lawyer’ might indeed be an explosive combination of aspirin and caffeine, not clear however how it could alleviate  migraine… Interestingly, Bayer also commercialised Heroin as a branded cough remedy around 1900, as shown in the old black and white ad. Heroin is probably the opposite example of a remedy which is also a poison. 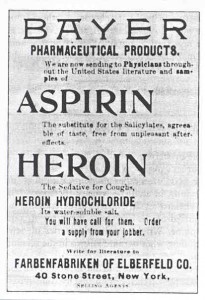 The whole story of aspirin is probably more relevant for students in management than in law — it shows that intellectual property protection is not always the key factor for success. (But there are counter-examples, where the adequate management of an IP portfolio has made it possible to extent a product’s success over time; also, Bayer has invested heavily in protecting its trademarks even after they were expropriated and/or became generic).