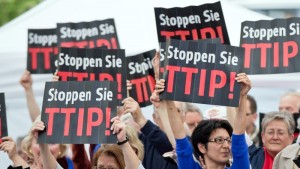 Last week, several demonstrations against the TTIP (Transatlantic Trade and Investment Partnership) were organized throughout Europe, in particular in Berlin and Brussels. This trade agreement between the U.S. and the EU is still under negotiation (the 11th round of negotiations is taking place in Miami on Oct. 19-23, 2015). The topics of contention are numerous.

In addition to the tariffs cuts common to most international trade agreements, the TTIP aims to lower regulatory barriers. This is often perceived as an attack against the existing regulations. This perception not only exists in Europe, it is also shared in the U.S. but the topics of concern differ. The Americans for instance tend to favor their own financial regulations, while the European resistance is more focused on food, health or environmental regulation. The anti-TTIP feeling is clearly more spread within the population in Europe than in America.

Surprisingly for a country whose industry largely depends on exports, Germany has experienced a widespread opposition which focuses on the Investor-State Dispute Settlement (ISDS) mechanism, an arbitration system allowing private parties to take action against States’ measures which could jeopardize their investment (see the Deutsche Welle coverage here and the EurActiv.com page here). This system indeed gives the arbitrators the power to rule on policy measures that could affect private investments. Some fear it could deter governments to adopt stringent measures for instance to protect consumers or the environment. The lack of trust in the existing ISDS induced the Commission to come in September 2015 with “a new and transparent system for resolving disputes between investors and States”  –  the Investment Court System. According to the Commission (see here), “the proposal for the new court system includes major improvements such as:

It remains to be seen whether this new court system will respond to the concerns raised about the ISDS.

Regarding the content of TTIP, the Commission has prepared a short presentation in a 45 pages long document entitled Inside TTIP (see here). The document contains an overview of the various parts and chapters of TTIP (see p. 9), but does not otherwise go into details. Two pages of this document are devoted to IP issues (p. 45-46). In addition, part of the EU negotiating texts are released on another page of the DG Trade website. Only two meager proposals have been released so far (on IPR border measures and on Provisions in international agreements relating to IP) but an EU position paper is also available (the IPR EU position paper).

Here are the first two questions (on what the IP chapter of TTIP could include in the future):

In parallel the US is negotiating the TPP (Trans-Pacific Partnership) with 11 countries around the Pacific ocean. On October 5, 2015, the U.S. and the other negotiating countries announced that a deal on the TPP had been reached. The IP chapter of the TPP seems more developed and more contentious than what could/will be included in the IP chapter of TTIP. WikiLeaks released the controversial IP chapter of TPP on Oct. 9, 2015 (see the open media.ca page with the link to WikiLeaks).

Here are the questions concerning the TPP text recently released:

This exercise should help you to bridge the gap between the debates in the press on those international trade agreements and the detailed legal provisions adopted at the end of the process.