In this series of posts, my objective is to explain the basic economic mechanisms that shape the competition among platforms. In this episode, I argue that positive network effects tend to lead to situations of market dominance: one platform ‘wins’ the market, leaving almost nothing to its competitors. In the next episode, I will show that there also exist counteracting forces that may allow several competing platforms to stay on the market. Finally, in the third episode, I will discuss how interoperability and multihoming are game-changers, insofar as they determine the form of competition that exists among platforms.

(This series of posts combines elements taken from a book, entitled ‘The Economics of Platforms‘, that Martin Peitz and myself are preparing for Cambridge University Press).

In many situations, users can choose among several platforms to achieve the benefits of interaction: languages, communication channels, video game consoles, search engines, etc. Positive network effects make this choice quite peculiar insofar as they often induce users to coordinate on joining a single platform, at the expense of all the other platforms. A so-called ‘winner-takes-all’ outcome may then emerge, with the following two interesting properties. First, even though the platforms to choose from appear to be ex ante symmetric, the market is likely to end up in an asymmetric situation. Second, the benefit of coordinating on a single platform may lead some users to adopt actions that do not give them the highest stand-alone utility; that is, some users may decide to go against their personal tastes. 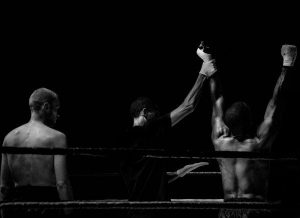 To see this, let us develop a very simple model with two platforms, named A and B, and two types of users, named R-types and S-types (see Arthur, 1989). Users arrive randomly on the market and have to choose between the two platforms. In a world without network effects, users would only compare the stand-alone utilities that the two platforms offer. If we assume that R-types perceive the stand-alone utility of platform A as larger, while S-types do for platform B, and if the two types of users are equally represented in the population, then the two platforms should have an equal market share in the long run. At each period, there is an equal chance that any platform will be chosen. It is like tossing a fair coin: the law of large numbers predicts an equal number of tails and heads in the long run.

Things change dramatically in the presence of positive direct network effects that are platform-specific (i.e., they are limited to users who adopt the same platform). If users care not only about stand-alone utilities but also about the possibility to interact with other users, their choice is affected by the current market shares of the two platforms when their turn comes to make a choice. The natural tendency to choose the platform of one’s taste (i.e., platform A for an R-type or platform B for an S-type) may then be overturned. To give some structure to the model, suppose that users place a value of 10 on having their preferred stand-alone utility and a value of 1 on interacting with any other user. Then, when an R-type arrives on the market, she will decide to adopt platform B if she observes that platform B counts at least 10 more users than platform A: the advantage of platform B in terms of network effects outweighs the disadvantage it faces for R-types in terms of stand-alone utility. From then on (see the figure below), all users will adopt platform B irrespective of their type: platform B will increase its market share and platform A will never catch up. It is as if the coin we flip repeatedly became increasingly unfair: the more, say, heads are drawn, the more the weight distribution of the coin becomes asymmetric so that the probability of heads increases. This kind of process leads eventually to a state in which only one result obtains. In our example, this means that a single platform will eventually take the whole market.

This argument shows that positive network effects, and the attraction loops that they generate, have consequential impacts on the competition between incompatible platforms, as they lead to winner-takes-all situations. Markets with platforms have thus the flavour of natural monopolies: only one firm can reasonably survive while making a profit. In general, natural monopolies are due to supply-side economies of scale: because of large set-up cost (e.g., building the infrastructure to distribute the product), it is more efficient to have one large firms producing large quantities. Think, for instance, at the electricity or transport sectors. In contrast, in markets with platforms, increasing returns to scale are observed on the demand side: when a platform attracts more users (i.e., “produces more”), it is not the average cost per user that decreases but it is the average revenue per user that increases (because users are willing to pay more to be on a larger platform).

Arthur (1989) also uses his model to describe four common features of the competition between incompatible platforms:

The following video illustrates how the current dominance of the QWERTY keyboard fits this description:

In the next post of this series, I describe several forces that may counteract the feedback loops induced by positive network effects.