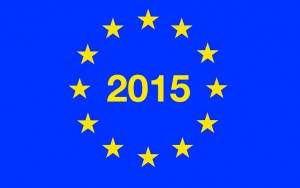 Starting from this post I will try to regularly update you, IPdigIT readers, on the latest legislative developments taking place at the EU level in the field of Intellectual Property and ICT. This article should be considered an introduction and an incentive to further follow the blog. Each of the issues briefly described below, deserves at least a few separate posts!

2015  only just started, and it is already turning into an interesting and active year, at least for those who follow the developments in intellectual property and ICT. Not only the European Commission (EC), but also other institutions including the Parliament (EP) and the Court of Justice of the EU (CJEU) are actively working in these areas.  Let me guide you through the highlights of the months to come.

One of the most challenging and exciting projects in 2015 will definitely be the long awaited copyright reform. According to the EC’s Working Programme for 2015, the main executive body of the European Union is planning to finally modernise the existing copyright framework, in order to make it more ‘up to date’ and ‘fit for purpose’, to use the  language of the Brussels corridors.  When and how the EC is going to tackle the proposal still remains rather unclear. How difficult it is to accommodate the rising demands (just as the diverse opinions within the College of Commissioners), is proved by the delay of the White Paper, which was supposed to set the direction of future changes on the basis of the result of last year’s public consultation. According to the latest rumours, the reform will focus on ‘targeted measures’, being rather evolution than revolution. After such long preparatory period this is considered a disappointment by many . The exact timing has not been officially announced yet, however Gunther Oetinger, the commissioner in charge, has confirmed on Twitter that he is aiming to submit a legislative proposal this year.

We will try to update regularly on this issue, and until then I encourage you to read the posts of our other IPdigIT contributors, Eleonora Rosati (here) and Alain Strowel (here), who are writing extensively on this subject.

Some more details regarding the timing and the content of this particularly exciting proposal might be revealed at the meeting between the EC and the relevant stakeholders on the 24th of February. The workshop will be devoted to the digital economy at large and is strongly linked to the strategy on the future of the Digital Single Market, which is expected to be announced before this summer.

Apart from the copyright reform the EC is currently looking into diverse areas, ranging from consumer’s rights in online sales to possible regulation on the internet platforms.

2015 should not only see new proposals to be tabled, we might also hope that a few meaningful dossiers will be finalised. The telecom sector is impatiently looking at the outcome of the Council’s work on the so called Connected Continent. The major difficulty is how to define net neutrality. We will be updating on the developments on this  subject. Until then I encourage you to read other posts written earlier by Alain Strowel and myself.

Of course the ongoing review of the directive on the protection of individuals with regard to the processing of personal data and on the free movement of such data cannot be omitted.  The works are ongoing since 2012, when the EC published the proposal for a General Data Protection Regulation. By now we have seen some significant developments, including the position of the European Parliament. Just like in the copyright field, a vast number of interests are impacted by the changes in  data protection rules. The next move in this file belongs to the Council. As the topic certainly deserves an individual post, we will save the spicy details for a separate article.

On the table we also have the Network and Information Security Directive. With this proposal being part of the broader Cybersecurity Strategy, the Commission ‘aims to ensure a high common level of network and information security across the Union’. Being under discussion since 2013, this directive might have finally reached momentum, (sadly enough) due to the latest terrorist attacks and the yellow alert in various EU capitals.

Fans of digital economy will certainly not be bored in the upcoming months.

On top of the above mentioned copyright reform, there are other quite  interesting developments in the Intellectual Property ‘bubble’.

Definitely the closest from being finalised is the trade mark package. Despite the efforts of the Italian Presidency at the end of last year, it has been announced that the final trilogue (trilateral negotiations between the EP, EC and the Council) has been postponed and negotiations will resume under the Latvian leadership. Surprisingly, among the issues which seem to require ‘more time for consideration’, there are no hotly debated topics such as the treatment of goods in transit and small consignments. On those issues, the parties have already reached an agreement. According to rumours, a bone of contention is the surplus of OHIM’s budget. It would be very interesting to see whether the member states will be keen to let go their national interests so easily.

Another discussed subject is the proposal for a new directive on the protection of undisclosed know-how and business information (trade secrets) against their unlawful acquisition, use and disclosure. Trade secrets are not a category of intellectual property rights in the narrow sense. Nevertheless, the rules on protecting undisclosed information of a commercial value play a significant role in the IP management strategies (Paul Belleflamme has written about it here and here, also check Alain Strowel’s post). Moreover, trade secrects are an interesting tool for smaller companies, who do not have the necessary resources to apply for relatively expensive patent protection. In the current fragmented legal landscape the common framework to address misappropriations of trade secrets will therefore definitely be an added value to the European companies. Unlike in the majority of other dossiers, in this case the member states moved on very swiftly and adopted their position already in May 2014. We are now witnessing the process in the European Parliament, where the leading Legal Affairs Committee has just published its draft report. You will definitely read more about this file in the coming weeks.

And last but not least, the Unitary Patent saga is supposedly closer than ever to complete. The latest development concerns the court case on the Spanish actions against the EU Regulations on the unitary patent protection. Mr Yves Bot, the Advocate General of the Court of Justice, confirmed the link between the Unitary Patent Protection and the Unified Patent Court Agreement, by stressing that it would be contrary to the principles underlying the Regulations to apply them before the establishment of the Unified Patent Court. According to him Member States are obliged by the principle of sincere cooperation to ratify the Unified Patent Court Agreement. Until we see whether the CJEU will confirm this position, the opinion has definitely been considered as a boost to the implementation process, which nevertheless remains quite modest. Only 6 countries have ratified so far, among them only France out of the big three (next to Germany and the UK).

I hope this briefing will help you to better swim in this ocean of information, and  will make you impatiently wait for another post from the European bubble. Meanwhile feel free to post your suggestions or share your comments below.