An article in the Financial Times (Tim Harford, ‘Do you believe in sharing?’, F.T., August 31/Sept. 1 2013) reminds us of an eternal debate: shall we believe in the ability of humans to adequately share and reasonably use the resources offered by our planet? Or do we have to define property rights so that over-consumption of natural resources, such as fish in the sea, is avoided?

“That all persons call the same thing mine in the sense in which each does so may be a fine thing, but it is impracticable; or if the words are taken in the other sense, such a unity in no way conduces to harmony. And there is another objection to the proposal. For that which is common to the greatest number has the least care bestowed upon it. Every one thinks chiefly of his own, hardly at all of the common interest; and only when he is himself concerned as an individual. For besides other considerations, everybody is more inclined to neglect the duty which he expects another to fulfill” (Aristotle)

The outcome is crucial for solving various environmental problems, including probably the most ever challenging issue for mankind: how to address climate change? 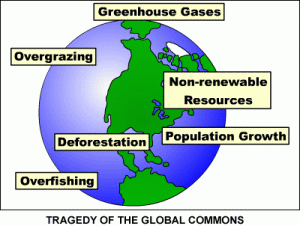 Relying on commons might be suicidal. So goes  “The Tragedy of the Commons”, a seminal article of Garrett Hardin from 1968 (see here). The tragic story is about a common pasture that everybody can use for grazing livestock:

“It is to be expected that each herdsman will try to keep as many cattle as possible on the commons…the rational herdsman concludes that the only sensible course for him to pursue is to add another animal to his herd. And another; and another… But this is the conclusion reached by each and every rational herdsman sharing a commons. Therein is the tragedy. Each man is locked into a system that compels him to increase his herd without limit–in a world that is limited. Ruin is the destination toward which all men rush, each pursuing his own best interest in a society that believes in the freedom of the commons.”

For Hardin, the ruin of the commons is inevitable as individuals cannot internalize the negative consequence that their consumption might have on the resource. But society could find a way out and establish private property rights.

In addition, in a state of commons free for all to use, no one has the incentive to invest in cultivating the land and assuring its long-term sustainability. Because of the lack of exclusivity, there is under-investment in the production. The existence of this negative externality of the market requires the State to intervene, for instance by mandating some enclosure of the commons.

Not everybody would buy the idea popularized by Hardin’s article. One of his most tenacious opponent won the Nobel prize for economics in 2009: Elinor Ostrom. For her, “The tragedy of the commons wasn’t a tragedy at all. It was a problem – and problems have solutions” (T. Harford in the F.T.). Ostrom found that, all over the world, similar environmental problems were solved, again and again, by local communities. For instance, she found that the Swiss farmers of the village of Törbel, in the 13th century,  had developed a system of rules, fines and local associations to avoid the over-utilization of Alpine pasture and firewood. In other regions, a lottery system had been designed to adequately allocate the rights to fish. Far away from the grand theory of Hardin that she openly opposed,  Ostrom discovered many instances throughout the world where a bottom up approach had developed an effective monitoring system,  graduated sanctions for those who break the rules and even some alternative dispute-settlement mechanisms.

Ostrom died last June, but her encouraging message remains. Especially in relation to climate change, a global problem for which global responses are tried, without much success, at regular meetings under the auspices of the UNFCC (already the acronym of this United Nations Framework Convention on Climate Change is scary!). Ostrom believed that focusing on those global agreements was a mistake as the common pool problems are too complex to be solved from the top down. And what about enforcing those global instruments without the support of local communities?

Now, is the ‘tragedy of the commons’  something useful for the justification of intellectual property rights? Hardin’s seminal article focuses on the rights in land. Is it justified to apply his analysis to intangible or informational goods? There is a compelling argument already put forward by H. Demsetz in a leading article of 1967:

“Consider the problems of copyright and patents. If a new idea is freely appropriable by all, if there exist communal rights to new ideas, incentives for developing such ideas will be lacking. The benefits derivable from these ideas will not be concentrated on their originators. If we extend some degree of private rights to the originators, these ideas will come forth at a more rapid pace” (Toward a Theory of Property Rights).

Here are the questions:

These are just a few questions to think about in order to further compare the ‘proprietary’ approach with the ‘sharing’ approach of the commons.