The economic theory introduces property rights as an institution aimed at internalising actions that are beneficial to society (Demsetz, 1967). It also depicts these rights as a means to set up transactions between right holders and other agents providing complementary goods and services. The previous consent rule arranges these transactions as a contractual chain stemming down from the right holders to the final consumer. 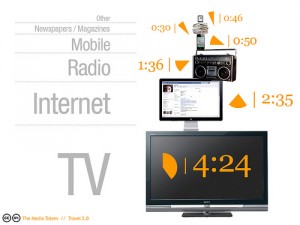 The objective of this series of posts is to show that in the case of copyright, the value added to proprietary expressions is produced through media ecosystems. The prevalence of external effects associated with the media coverage – the mediatisation of the works – reinforces the internalisation function of copyright. But in a way that differs from the traditional vertical chain of contracts. And that makes copyright exploitation a highly empirical activity.

Copyrighted expressions are usually created to address audiences, e.g. receivers that are unknown from the emitter. They are then brought to the attention of the public through media.

Media provide to the expression its public status. Conversely to business talks, or private correspondence, mediatised expressions are messages formally addressed to the public.

Of course, this is not only true for expressions. It applies to any kind of goods addressing indistinct consumers on competitive markets. Consumers are noticed through media of the availability and characteristics of tradable goods and services.

This series of posts deals with mediatisation that is the operation carried by media so to give material or immaterial goods a public status. Mediatisation indeed covers signalling or advertising, but also all the kinds of information – design, brands, names, reviews, buzz, word-of mouth, social image – attached to a public or tradable item.

Our thesis is that mediatisation is an information complement attached to the mediatised item. It is a complementary good that alters – increases or decreases – the utility of the plain product. The complement is produced through a set of media packed with information externalities. In the analogue world, such ecosystems used to be rather stable. So were the relations between producers, media and distributors, allowing fixed arrangements to internalise the externalities. In the digital environment, media ecosystems get continuously denser which makes internalisation strategies a moving target.

Mediatisation adds meaning to functional goods or services. In the case of copyrighted expressions, this meaning is added to products whose utility is already meaning. Besides, as we will show, the dematerialisation of media tones down the borders between mediatisation and distribution. Hence, mediatisation economics are even more difficult to assess for copyrighted goods than for material ones.

The rest of this series of posts (to be released in the coming weeks) is structured as follows: