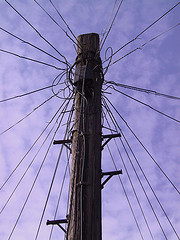 Network effects are ubiquitous in the digital economy. They refer to the idea that, for many reasons, users prefer to be connected to a bigger network than to a smaller one. To be more precise, here is a textbook explanation of network effects (see Chapter 20 in Belleflamme and Peitz, 2010):

A product is said to exhibit network effects if each user’s utility is increasing in the number of other users of that product or of products compatible with it.

Network effects are observed on two types of markets.

In network (or communication) markets, the benefit of consumers comes from the ability to communicate with other consumers via the network. In such markets, network effects are said to be direct and translate the fact that the more agents are present on a network, the larger are the communication opportunities, and the greater are the incentives for other agents to join this network. Obvious examples of goods exhibiting direct network effects are telephone, fax, email, instant messaging; less ‘technological’ examples are the adoption of languages (it is useful to learn English because it has become the lingua franca in many environments) or of conventions (driving is safer if everyone keeps on the same side of the road).

In system markets, products are obtained by combining different components in a complementary way (often some hardware and a variety of applications). Here, the network effects are indirect by nature: they refer to the fact that the more applications are available for a hardware, the greater are the incentives for consumers to purchase the system, and the more application writers desire writing applications for this hardware. Examples of goods exhibiting indirect network effects abound in the world of consumer electronics products, such as personal computers, VCR, videogame consoles, CD and DVD players. In the latter example, the greater the variety of movies proposed for a certain DVD format, the greater the benefit derived from the DVD player reading this particular format; in turn, the decisions of movie studios to back a particular DVD format depend on the number of consumers who adopt the compatible DVD player. In general, indirect network effects are present in ‘two- (or multi-) sided markets’ (such as payment systems – e.g. Amex, Mastercard or Visa – and heterosexual dating clubs), which can be defined as platforms that serve two (or more) distinct groups of customers who value each other’s participation or level of transaction (for instance, credit card holders’ utility increases as more stores near them accept their card, and the more customers carrying the card, the more stores value it).

An important feature of markets with network effects is that expectations and history play a key role. The importance of expectations follows from the incompleteness of contracts: contracts generally cover bilateral transactions between one buyer and one seller, while buyers would like to coordinate their choices with one another. Then, as contracts fail to specify transactions which are complementary and highly relevant to the current one, it is crucial for buyers to form expectations about those transactions. This also means that history matters: because consumers value compatibility with other consumers’ purchases, past choices guide future ones.

Consequently, from the sellers’ point of view, past market share becomes a highly valuable asset: in the presence of network effects, a large network will tend to ‘snowball’ (that is, a large network creates positive expectations about its future size in a self-reinforcing way since consumers have incentives to join the network now and therefore enlarge the network tomorrow).