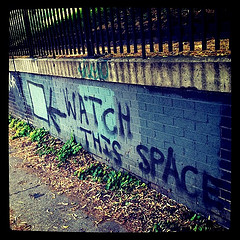 Watch this space, by matt-lucht

(Updated 25/02/2013) Network effects are ubiquitous in the digital economy. They refer to the idea that users prefer to be connected to a bigger network than to a smaller one. (For a more precise description of this concept, see the ‘Theory digest’ on this blog).

The concern for compatibility also implies that consumers base their own choices on what other consumers have chosen in the past, are choosing now or are likely to choose in the future. As a result, history and expectations play a crucial role in markets with network effects. In particular, self-fulfilling prophecies may arise: if each potential user expects that many other users will join a particular network, then this network will look very attractive and will indeed attract many users, which will confirm the initial expectations.

The Million Dollar Homepage provides a spectacular illustration of such self-fulfilling prophecy. Here is how Wikipedia describes this project:

The Million Dollar Homepage is a website conceived in 2005 by Alex Tew, a student from Wiltshire, England, to raise money for his university education. The home page consists of a million pixels arranged in a 1000 × 1000 pixel grid; the image-based links on it were sold for $1 per pixel in 10 × 10 blocks. The purchasers of these pixel blocks provided tiny images to be displayed on them, a URL to which the images were linked, and a slogan to be displayed when hovering a cursor over the link. The aim of the website was to sell all of the pixels in the image, thus generating a million dollars of income for the creator. (…) Launched on 26 August 2005, the website became an Internet phenomenon. On 1 January 2006, the final 1,000 pixels were put up for auction on eBay. The auction closed on 11 January with a winning bid of $38,100 that brought the final tally to $1,037,100 in gross income.

The previous story could wrongly suggest that launching network goods is relatively easy. Apparently, you just need to convince the first users that your product will be a hit to make them adopt it; then, a virtuous self-reinforcing process will automatically work for you; in other words, success will beget further success! This is, of course, too good to be true. In fact, another self-fulfilling prophecy may well work in the exact opposite direction: if users believe that the network will never expand, they will have no reason to join and the network will indeed stagnate…

The coexistence of such ‘good’ and ‘bad’ trajectories make markets for network goods highly unpredictable. The final outcome may hinge on ‘small events’ that occur early in the diffusion of the network good. Some scholars have used the phrase path dependence to decribe such process where “history matters” (see here for a critical review of this concept).

It is therefore not clear at all whether Alex Tew’s new venture will attain its objective. Devised together with Michael Birch (co-founder of the social network Bebo), the WaterForward project is a fundraising campaign that aims at using the network effect of social networks to support charity: water, a non-profit organization that brings clean and safe drinking water to people in developing countries.

As explained in this 2011 techcrunch.com article, the initial concept was the following:

You can donate $10 on behalf a friend, or multiple friends, and their name and picture gets placed in the online WaterForward book. The only way to get in the book is if someone puts you there by donating on your behalf. Once you are placed in the book, you are encouraged to pay it forward to someone else. The site imports your Facebook and Twitter friends to make it easy.

As you can see here, it seems that the concept has now evolved (February 2013).

The question I would like you to address is twofold:

(You’ll find here the previous comments to this post.)