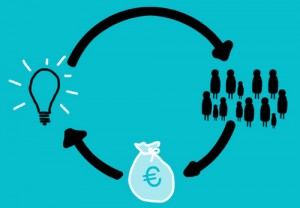 Crowdfunding platforms (CFPs) facilitate the interaction between entrepreneurs trying to raise funds and consumers/investors willing to participate in the financing of new projects. Why can they be seen as multisided platforms? As Evans (2011) explains it, a business opportunity emerges for a multisided platform when three conditions are met:

As I now show, CFPs meet these three conditions.

CFPs link at least two distinct groups: entrepreneurs (fundraisers) on one side and contributors (funders) on the other side. Some platforms have brought an additional side on board, namely sophisticated investors (such as venture capitalists, business angels, and institutional investors). For instance, two Belgian platforms have chosen this route: MyMicroInvest allows projects to be funded by the crowd together with a professional venture capitalist; Angel.me has established a partnership with the bank Belfius. The objective is clear: the participation of sophisticated investors is meant to reassure individual contributors; because these investors have much larger capacities and experience to investigate the reliability and success probability of proposed projects, crowdfunders can infer useful information from the choices that these investors make. Note that the opposite may be true as well: sophisticated investors may use the “wisdom of the crowd” as an indicator of the potential success of a new product (something that they may have a hard time to evaluate otherwise).

In the same vein, Indiegogo (a CFP popular with hardware projects) has added some celebrity investors (such as Virgin Group founder Sir Richard Branson, or Pay Pal Founder Max Levchin) to its $40 million round in new funds from investors.

Each group’s valuation of the platform depends on the participation of the other group(s).

As far as contributors are concerned, there are two reasons for which they are likely to prefer platforms with a larger number of entrepreneurs: such platforms provide them with a wider set of campaigns that they can choose to support and, in the reward-based model, such platforms also increase the probability that contributors will obtain rewards that fit their tastes. Yet, another force may play in the opposite direction: the chances that any given campaign will be successful (i.e., will reach the required threshold) are inversely related to the number of campaigns that the platform hosts; for that reason, contributors may prefer platforms with a smaller number of entrepreneurs. We may conjecture that the former effects outweigh the latter (in particular if contributors can find some way to coordinate on projects that are more likely to be successful). It is thus reasonable to say that entrepreneurs exert positive indirect network effects on contributors.

It is important to note that agents on both sides also care about what the members of their own group do; that is, within-side external effects are also present. Such effects are likely to be negative among entrepreneurs as they compete for the funds that the crowdfunders are willing to contribute: the more campaigns the platform hosts, the tougher the competition. In contrast, positive within-group effects exist among contributors: the project that a particular contributor has chosen to support is more likely to reach the required threshold the larger is the number of contributors who may choose to back this project too.

All these effects are summarized in the next figure: 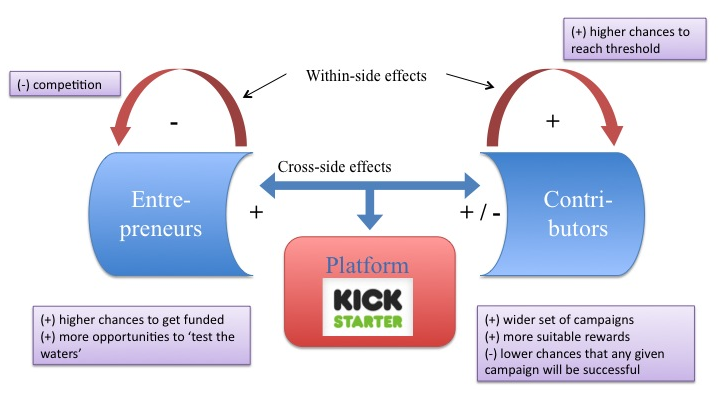 Externalities on a crowdfunding platform

As for the third condition, even though entrepreneurs may be able to connect with the crowd by their own means (here is an example), CFPs undoubtedly offer them both higher prospects of success and lower costs. In particular, CFPs are able to mitigate the problems raised by information asymmetries much more efficiently than any individual fundraiser could do on his/her own (on this topic, see Agrawal et al., 2013).