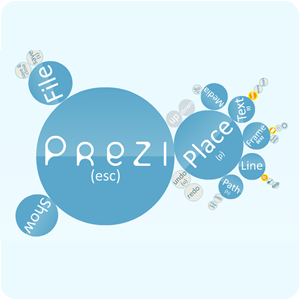 Last year, I had to deliver a speech about the economics of Internet to a non-technical audience. To make my presentation (hopefully) more pleasant for this audience, and to seize the opportunity to learn a new application, I decided to use Prezi. The application was rather new at the time (it had been launched in 2009 but the buzz really started in 2012) and I was happy to show off by using it. Yet, that was not my unique motivation: I also wanted to use Prezi as an illustration for one of the questions that I was addressing in my presentation, namely: “How is it possible to make money with free stuff on the Internet?” (a theme that I have already developed on this blog, in French, here and here).

There are three main economic environments in which freebies can be successfully used to make a profit: environments with network effects, with switching costs and/or with uncertainty about the quality of products. It appears that Prezi stands at the crossroads of these three environments.

By offering a free version (either via online use, or via a “desktop” version that can be used for free during one month, or by granting free access to students and teachers), Prezi attempts to solve the problems raised by the three environments that I have just described. In fact, the free version …

… attracts the first users, who will generate network effects and, thereby, attract other users;
… reassures users, who anticipate that they may be “trapped” by switching costs once they will have invested time in learning the application;
… allows wary users to get acquainted with the application and realize how much they value it.

Of course, Prezi will never become a profitable business if the majority of users content themselves with the free version. The objective is to bring a sufficient number of users (mostly businesses) to turn to the paid versions, which provide users with a variety of advanced (premium) features. This is the so-called “freemium” model, which is based on a menu of free and premium versions.

Note that I wrote this analysis one year ago. Since then, I haven’t checked whether the freemium model does indeed work for Prezi.  This is what I would like you to check for me. You may also want to have a look at other attempts to use the freemium pricing strategy (a useful entry point could be this presentation), or to discuss whether Chris Anderson was right in 2008 when stating that “$0.00 Is the Future of Business”.