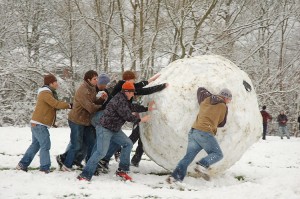 In a previous post, I described the success story of Alex Tew who managed to raise $1 million for his university education by selling one million pixels on a web page, at at price of $1 per pixel. In exchange for the pixels that they bought, purchasers had the possibility to display tiny images on them, have these images linked to some URL, and have a message appearing when hovering the cursor over the image.

I took this story as an example of the sort of self-fulfilling prophecies that may result from network effects; as I wrote in the post:

If each potential user expects that many other users will join a particular network, then this network will look very attractive and will indeed attract many users, which will confirm the initial expectations. [Yet] another self-fulfilling prophecy may well work in the exact opposite direction: if users believe that the network will never expand, they will have no reason to join and the network will indeed stagnate…

So, depending on expectations being optimistic or pessimistic, self-fulfilling prophecies may turn into success or failure. The key questions are then the following: Is it possible to generate favorable expectations and if yes, how?

In the case of Alex Tew, as reported by Wikipedia, the deciding factors were a combination of initial investments by friends (in the hope of making the snowball roll) and of sheer luck (unexpected exposure in the media amplified the word-of-mouth):

The first sale, three days after the site began operating [in August 2005], was to an online music website operated by a friend of Tew’s. He bought 400 pixels in a 20 × 20 block. The site was initially marketed only through word of mouth; however, after the site had made $1,000, a press release was sent out that was picked up by the BBC. The technology news website The Register featured two articles on The Million Dollar Homepage in September. By the end of the month, The Million Dollar Homepage had received $250,000 and was ranked Number 3 on Alexa Internet’s list of “Movers and Shakers” behind the websites for Britney Spears and Photo District News.

Alex Tew’s story has inevitably inspired other entrepreneurs. I know at least of two of them as they have taken the pain of contacting me personally to ask for some coverage of their project. To meet their request, I reproduce here the messages that they sent me. The first project is named LogoBrowser:

(November 8, 2013) Dear Professor, I have found your article about Alex Tew and his Million Dollar Homepage and follow-up ideas that you used to write on IPdigIT. I would like to ask you if it is possible to write an article about my startup/project which is based on Tew’s idea? The project is named LogoBrowser and it is an innovative way to promote the strongest brands Logos online! I think that my project has a great potential and needs publicity, which could help press release.

My project is the fruit of intensive work as I was inspired by the idea of creating a distinctive and recognizable place on the internet, with a smart layout and specially designed space for use by the largest possible number of globally and/or locally strong Logos or Logos aspiring to become such.

For advertisers a participation in the LogoBrowser project is a chance to emphasize their presence and succeed in being recognised/distinguished among the prestigious well known brands.

I hope that you will appreciate my idea. And now you can try and find out the potential of the LogoBrowser project visiting our DEMO page at www.demo.logobrowser.com and soon, the main project that is starting in a few days, as you’ll find at www.logobrowser.com.
You can check Us also: www.facebook.com/logobrowser

I would be very grateful for any kind of help.

The second project goes by the name of Worldpixel:

(January 31, 2014) Lol i have no friends and i can’t begin my project worldpixel.fr.I hope it’s a great idea and i’m sure that some pixels are going to be sold soon because a pixel cost only 0.01 €.

It’s really cheap and your advertise will be display for life.

Nevertheless it’s a game and i promised to let clue in my post.

So (United kingdom : One of two pixels is free)

So, I have done my part. I wouldn’t pretend that IPdigIT has the same leverage as the BBC to start a loop of positive feedback and turn these two projects into new success stories. But who knows?

I am very curious to know your views about these two projects and their probability of success.