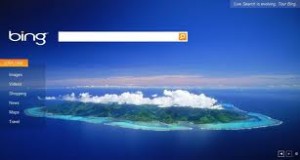 Four years ago, Microsoft released a new search engine: Bing. It was aimed to be an improved version of former Microsoft’s search engines: Live Search and MSN Search. While it has been struggling these past years to gain market share, Google has remained the leader far ahead of its competitors. In July, Bing had 17.9% of the search engine market. Even if figures report that Bing is incrementally gaining market share, it is not in proportions that may threaten Google: between May 2012 and May 2013, Bing increased its market share by 2% while Google’s remained the same.

Despite the millions USD spent in promotional efforts to increase Bing’s awareness and use (the “Bing it on” campaign which has raised many debates , the “Bing Rewards” concept: no longer than a week ago I received an email from Microsoft encouraging me to register on Bing Rewards, etc.), the search engine is still far from having a stranglehold on the market. The question is then: Why is that so important to keep on spending so much money pursuing Google? Was the search engine market the only rational for launching such a significantly-enhanced search engine in a losing battle? Flashback to 2008…

Before making the decision to invest in a brand-new search engine, Microsoft had to evaluate the situation to assess whether deeply investing in this market was making any business sense.

Up to September 2008, Microsoft has had a hard time to compete with Google and Yahoo in the online searching advertising business (resp. market share: 8.3%, 63% and 20%). Jay Girotto, a member of Microsoft team search said:

“We’re chasing Google’s taillights and are losing money as we do so”.

The “follower position” of Microsoft was indeed very costly because of the winner-take-all tendency of this market. Search engines are two-sided platforms where advertisers pay to access to users’ information. By connecting both sides, platforms create value: the more search queries, the higher the results’ quality; the more users, the higher the value to advertisers; the more advertisers, the more likely are good matches. Sided and cross-sided network effects are then at play and key to succeed in this market. This is precisely where Microsoft is at a disadvantage. Users and advertisers are willing to be part of the biggest network, to increase the value they derive from the platform. However, on a market evaluated at $20 billion, Microsoft’s market share was only up to 8.3%. This generated an insufficient volume of interactions for the platform to take off and start a positive spiral that would feed itself thanks to network effects. In short, the critical mass was not reached for Microsoft to count on network effects and seriously compete for online ads. 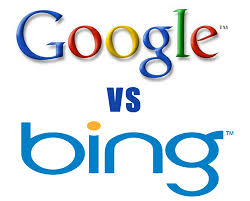 Besides, Microsoft was not able to offer all Google’s features (ability to deal with tough technical issues such as managing large farms of thousands of servers, designing customized OS for them, ranking an increasing number of documents, etc.) while Google has matched any of its innovations (e.g., the opinion index). Many considerations seemed thus to plead for a decision of not investing in this market in order to allocate precious resources to other businesses. This battle seemed indeed to be already lost and any dollar spent trying to win it may be considered as wasted. However, Microsoft did significant investments in launching a brand-new search engine: Bing. Why?

Three reasons to cling to

Three reasons seem to prevail: [1] the interdependencies and complementarities among Microsoft’s businesses, [2] the value of a locked-in customer base, and [3] the access to users’ information.

1. More than ever, Microsoft’s corporate strategy is “related” since all its businesses are aimed to compete as one platform, with users on one side, and third-party (e.g., advertisers) on the other. It is due to users’ desire to be provided with compatible and related services on one single platform. The online mobile interface is indeed replacing the desktop interface, making the search business platform increasingly more central to Microsoft’s strategy (since other businesses like email, documents, etc. benefit from its users traffic). Therefore, if it fails to reverse its disadvantages in the search market, it would weaken the position of its other businesses by driving users away, at the risk of losing the competition game in much of its overall business portfolio. In its time this was also the lesson learned by Andreessen (founder of Netscape) about the internet browser “Navigator”:

“the key to success for the whole thing was getting ubiquity on the browser side”.

The concepts of network effects, switching costs and standard establishment clarify this quote; as more search queries lead to better quality results (because of the refinement of the engine with the information provided), users won’t switch when they get used to one search engine and trust it. Moreover, they are likely to use the other services of this platform since it is convenient (see above). Lastly, all that is further strengthened when more third-parties are attracted or when coding language standard is widespread.

Thus, if Google is left alone in this market, it would be more capable to successfully extend (its established standard and locked-in customer base) to other markets. It is thus part of Microsoft’s global strategy to stay in the search business. In this regard, it was strong enough (i.e., its 2008 operating cash flow was $22bn) to afford remaining a “costly follower” in order to catch up with Google and to protect its other businesses.

2. Since strong network effects and switching costs are at play in this market, the customer base attracted today is highly valuable when locked tomorrow. Hence, revenues Microsoft would forego now to attract users will be outweighed later by enjoying a locked-in customer base. This is known as the bargain-then-rip-off strategy: the goal is to drive customers’ traffic on the platform and make them used to it. In the same vein, Andreessen said about the internet browser market:

“if you don’t have market share now, you aren’t going to have revenue later. […] whoever gets the volume wins in the end”.

Even if Google enjoys a large customer base, I think Microsoft can still hope stealing market share in the coming years, especially because the search is still in its early days. The struggle between search engines for improving performance (i.e., relevance of searches) is indeed fierce and is a never-ending effort. Moreover, before launching Bing, Microsoft had succeeded in closing the gap with Google regarding the “relevance” side.

3. Strategically, Microsoft cannot afford missing the opportunity to get a direct access to the information of millions of users. This issue is key to all its actual businesses, but the “user-information-market” is above all the cornerstone of the future of any platform business. As a matter of example, Microsoft and Yahoo have quickly imitated Google toolbar when it came out because of the benefit of tracking users’ online behavior. This goldmine enables indeed better matching services to users’ needs, as well as increasing revenues from ads. Therefore, Microsoft can neither afford to have to pass through competitors’ environments to get this information, nor to let Google enhance further its leading position in this privileged access.

Only time will tell us how well Microsoft would perform against Google… From the past, we have however learned that Microsoft had successfully caught up on lots of markets (e.g., internet browser) by quickly and aggressively entering them. Basically, it was expanding from its OS locked-in customer base by stressing compatibility among its products. It also used bundles and special agreements. Microsoft even did business with competitors (e.g., AOL) to enter some markets, and to impose and extend its standard everywhere. As a result, it took over many markets by [1] quickly and widely imposing its standard (e.g., Windows) and killing others (e.g., Java), by [2] raising switching costs (e.g., Internet Explorer & Windows Media Player were offered with Windows to deter users from searching and installing similar software), and [3] network effects (e.g., enhancing compatibility among its services while worsening it for competitors’). However, all these strategies are not going to work anymore. First, Google has already imposed its standard and locked users in; second, bundling and killing other standards had led to antitrust issues in the past, and the buyout attempt on Yahoo in 2008 hasn’t worked. To win in this market, Microsoft needs thus a real breakthrough, a disruptive innovation, a game changer to win competition.

The current Google’s search market takeover is due to a deep understanding of the new economics of platform. It first concentrated on attracting customers, by focusing on the key issue: users’ satisfaction. By providing a free valuable service, users were actually locking themselves in. Since they derive value, they stick with Google and get used to it, which increases both network effects and switching costs. Then, Google can introduce ads to make revenues by selling its audience, which in turn enhances the quality of results and creates a constant positive loop. Conversely, MSN portal was embodied into a vicious cycle to increase revenues at the expense of users.

That being said, I think to outperform Google, Microsoft has to reverse the current disadvantages it has: network effects and lower quality search engine. I think Microsoft should keep on developing its search engine while in the meantime building its competitive strategy on the forces at play in this market: network effects, switching costs and standard establishment (we know indeed that “active search” users rely on one particular search engine, regardless of the type of purpose of search), to both attract and retain customers. 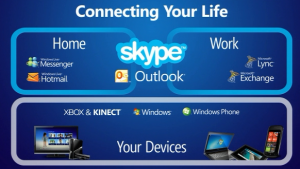 First of all, Microsoft has finally understood the power of a one-stop platform, interface, where all integrated services are available to users. The recent mergers of Skype and MSN messenger community, of hotmail and outlook accounts, of desktop Microsoft Office and cloud Skydrive documents, of hardware (e.g., surfaces, Nokia phones, etc.) and OS, are all going in this direction. Microsoft should keep on integrating services and gaining momentum on businesses where it is dominant (e.g., Skype) in order to drive its users to its search engine. Like it has recently begun to do, it has to gather all its users on one main platform from where they can access each service. In such market, that is in turn going to attract the other side (e.g., content providers), and thus create a positive loop (and increase quality) thanks to cross-sided network effects. Similarly to Google, which is strengthening its customer base by offering many services at a single location, Microsoft must federate its existing customer bases around a one-stop platform with integrated services.

Secondly, Microsoft should stay focused on developing and improving its search engine as well. There is indeed plenty of room for improvement (e.g., offering faster and more relevant results) and for creating a technologically superior search engine. Since search competition is about providing the best free service, I think innovation will help Microsoft to catch up, and provide enough value to users to offset their cost of switching. It should thus invest heavily; first, to match Google’s capacity (in terms of search engineers improving the technology and in the number of data centers), but especially to discover breakthroughs. Concretely, Microsoft is big enough to afford to launch internal and external projects; the “disruptive technologies history” indeed teaches us that external structures, like new entrants, are more likely to bring out-of-the-box insights on the market.

In closing, each solution attracts and retains users on Microsoft’s search engine, but adopting both will increase chances of beating competition. Moreover, since any innovation is likely to be matched, ways to enjoy network effects and switching costs should be thought in parallel.