This is the third post adapted from term papers that my master students submitted in June 2013. This post (originally written by Stephanie Goergen, Claire Goudeseune, Sophie Simonis et Xavier Vanwelde) has been honed and complemented by Olivier Simons.

You probably already heard of MyMajorCompany, Akamusic, Babyloan, Angel.me, or MyMicroInvest. The common denominator of all these web-platforms can be summarized in one word: “crowdfunding”. 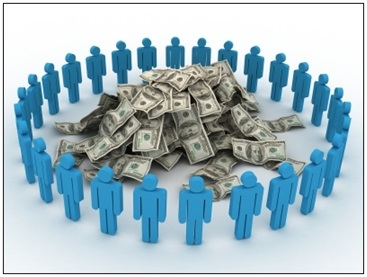 In a recent paper, Belleflamme, Lambert and Schwienbacher provide a very clear definition of crowdfunding:

The basic idea of crowdfunding is for an entrepreneur to raise external finance from a large audience (the “crowd”), where each individual provides a very small amount, instead of soliciting a small group of sophisticated investors. The entrepreneur uses his/her social networks and established platforms on the Internet to directly interact with the crowd.

Entrepreneurs are thus provided with an alternative and attractive way to raise funds for their project(s). In the same vein, it is worth noting that crowdfunding should not be considered as a “last resort solution”, but rather as an investment opportunity for different stakeholders. On the one hand, by strongly easing the opportunity to raise funds, it encourages entrepreneurs to continue creating. Besides, it provides them with an affordable way to test the market reaction. On the other hand, since such platforms help to match entrepreneurs and investors, it increases the likelihood that potential investors will find the ideal project they want to sponsor. Moreover, they can do that for a relatively small amount of money. As explained in Forbes in 2012 :

Crowdfunding offers these individuals a chance at success, by showcasing their businesses and projects to the entire world (…). While each site offers their unique spin, the general concept is the same across the board. Project creators can create a profile typically containing a short video, an introduction to their project, a list of rewards per donation, and some images to elaborate. The idea is to create a compelling message that readers will be drawn towards.

One of these crowdfunding platforms is MyMicroInvest, a Belgian company launched in 2012 for European entrepreneurs. As explained on this video, MyMicroInvest defines itself as

a unique equity based crowdfunding platform that enables individuals to invest from 100 euro alongside professionals in venture capital investment opportunities. (…) In order to comply with the law and enable start-ups to crowdfund their business over 100keuro, we publish a FSMA [“Financial Services and Markets”]-approved prospectus.

It is here worth noticing that crowdfunding is not only useful for SMEs and entrepreneurs, but also for bigger established firms. As explained here after, there are many ways through which large firms would benefit from this investment source:

While crowdfunding creates a funding opportunity that certain smaller businesses may not have received in the traditional way, it also is a great outlet for more established companies. These businesses may be interested in expanding their product range, and reverse engineering the investment could be a good idea, not to mention the excitement they can generate before the launch. Crowdfunding has proven itself as a great asset in sourcing potential customers and growing an audience.

Nowadays, an increasing number of crowdfunding platforms are being launched on the web: the growth of such platforms between 2008 and 2012 was 60% . You can find the most rated ones on Alloprod and some interesting statistics on nerdgraph. In 2011, approximately 1.5 billion dollars were globally raised thanks to crowdfunding platforms, and this trend is believed to persist in the coming years. (Vincent Bouquet also explains (in French) why he believes this phenomena is going to increase in his article page 24).

The first step to succeed when relying on crowdfunding is to predetermine a minimum sum of money to raise for a well-defined project and within a given time limit. If the targeted amount of money is not reached, no funds are collected and the project does not take off (see network effects below). On the opposite, if the project has collected enough money, it is launched. There are typically four ways to support projects: equity-based, reward-based, donation-based and lending-based. The most successful way in crowdfunding is reward-based: investors get rewards based on how much they give (e.g., gifts, pre-ordering opportunity, etc.), on the opposite of the classical equity-based way where investors usually receive stakes of ownership and rights to pecuniary compensation. Granting rewards (or recognition) instead of rights on the resulting work is thus a specificity of crowdfunding. 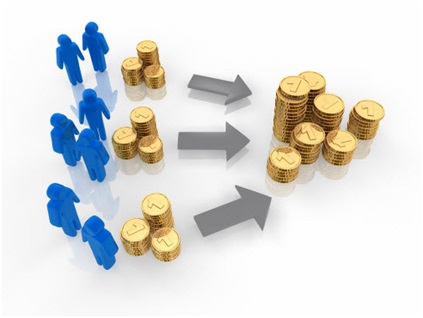 What actually makes a crowdfunding platform a powerful and attractive way to raise funds is its two-sided platforms’ features. Two-sided platforms provide an infrastructure and rules that facilitate transactions between distinct groups of users (as far as crowdfunding platform is concerned, those groups are investors and entrepreneurs/project creators). The platform is actually able to ease interactions thanks to the network effects it exhibits. In order to fully enjoy the benefits of networks effects, every platform has however to overcome the classical chicken-and-egg problem: it has to attract both investors and entrepreneurs on the platform.

For the entrepreneur to succeed, the project has to get viral as soon as possible. Therefore, the way it is introduced is crucial. The project creator has indeed to invest a lot of time and effort in order to attract individual and professional investors and to convince them to join their cause. This article in Forbes highlight why such viral aspect is a key of success for entrepreneurs:

“Typically, most successful projects receive about 25-40% of their revenue from their first, second and third degree of connections. This could include friends, family, work acquaintances, or anyone that the owner is connected to, including their second and third degree connections. Once a project has seen some traction, unrelated consumers start coming out of the woodwork to support campaigns they believe in”.

Because the early-investors of the project are of prime importance, the rationale of the project and the video supporting and explaining it play a decisive role in starting such positive spiral. The entrepreneur has thus to devote a decent amount of effort to launch its project and not simply wait for it to go viral. Moreover, it is worth noticing that the strong power of network effects may strengthen and fasten the failure of a crowdfunding platform as well, by starting a negative spiral if there is a lack of projects or of potential early-investors.

Therefore, because network effects are key to the business success, they intensify the competition between platforms. Users are highly valuable not only for their own contribution, but especially since they help attracting subsequent users (who prefer to be part of a bigger network). In such context, it is not surprising to observe some crowdfunding platforms fighting for survival: MyFirstCompany (one of the earliest Belgian crowdfunding platform) has been forced to giving up after one year of activity, its business model being not sustainable.

The scene of crowdfunding platforms may thus follow the same evolution as the one that was observed for search engines or for social networking websites: the dominance of one or two players, better known as the winner-takes-all tendency. Due to the importance of the related community of users, bigger platforms are more attractive than smaller ones. Hence, the likely outcome of such market structures is the emergence of one player dominating the whole market. That is what happened to social networking sites: multiple websites were co-existing in the early days, while soon after MySpace and Facebook emerged as the undisputed leaders, becoming now the unique players of the market. Because of the similarities in the key success factors of such platforms, it is reasonable to expect a similar pattern to occur among crowdfunding platforms.