The CJEU decision on Oliver Brüstle vs Greenpeace (C-34/10) – prepared by Rossana Ducato, post-doc researcher at UCLouvain and USL-B

On October 2011, the European Court of Justice (CJEU) issued a landmark decision on the patentability of biotech inventions in the case “Oliver Brüstle vs Greenpeace“.

The object of the case concerned the validity of a German patent, obtained by the neurobiologist Oliver Brüstle, covering:

Brüstle’s patent didn’t cover human embryos as such, but the stem cells derived from them. In particular, the embryonic stem cells used by Brüstle were pluripotent cells, obtained by embryos at the blastocyst phase (a process that generally occurs after 5 days from the fecundation). Since the cellular differentiation starts at this stage, pluripotent cells cannot separately develop into a human being. The use of embryonic stem cells was not the only controversial aspect in the Brüstle case: the process for the obtainment of the stem cells was able to damage or destruct the embryos at the blastocyst stage.

In 2004, the patent was challenged by Greenpeace before the Bundespatentgericht (German Federal Patent Court) on ethical grounds. The Court of first instance declared the patent invalid, because it covered stem cells obtained from embryos. Brüstle appealed the decision before the Bundesgerichtshof (Federal Court of Justice), which referred the case to the CJEU in 2009.

The CJEU was called to untie a Gordian knot about the patentability of biotech inventions. Indeed, the referred questions required the interpretation of Article 6(2)(c) of Directive 98/44/CE and, specifically, the legal notion of “human embryo” in patent law.

Article 6 is known as the ethical clause of the Directive. At par. 1, it establishes that “Inventions shall be considered unpatentable where their commercial exploitation would be contrary to ordre public or morality”. Paragraph 2, then, enumerates a list of inventions that, in any case, cannot be patented. Among them, there are the “uses of human embryos for industrial or commercial purposes”.

The CJEU went a step further and applied this principle also to unfertilised ova, whose development process can be artificially stimulated. The Court stated that “a non-fertilised human ovum which the cell nucleus from a mature human cell has been transplanted and a non-fertilised human ovum which division and further development have been stimulated by parthenogenesis” must be considered an embryo, because in both cases the abovementioned creative aptitude is present.

However, as specified by the CJEU itself, it is the national court that has to verify, in light of scientific developments, whether a stem cell obtained from embryos at the blastocyst stage (like those object of the Brüstle’s patent) are able to commence the development process.

Given this definition of embryos, the CJEU issued two related principles:

“the exclusion from patentability concerning the use of human embryos for industrial or commercial purposes in Article 6(2)(c ) of the Directive also [apply to the] use for scientific research”.

There is however an exception: a patent can be granted if the invention covers uses for therapeutic or diagnostic purposes aimed at treating the human embryo.

An invention cannot be patented if

How did the case end up in Germany?

In the national proceedings after the CJEU judgement, the Bundesgerichtshof partially upheld the Brüstle’s patent (docket nr. X ZR 58/07). The German Court confirmed the unpatentability of neural precursors cells entailing the destruction of a human embryo. However, it allowed the possibility to get patent if related to other methods for obtaining the same result without damaging the embryo.

Interestingly, in applying the CJEU definition of human embryo, the German Court found that, despite blastocyst can potentially commence the process of development described by the CJEU, they are “functionally dead”: in vitro stem cells can hardly turn into a human being without a considerable intervention (see here).

Therefore, according to the German court, blastocysts are not human embryos and stem cells can be patented as long as their production does not cause the destruction of an embryo.

The CJEU notion of embryo, derived from the principle of dignity, was not unanimously welcomed. In particular, it attracted several criticisms from the scientific community. The main concerns regarded the broadness and ambiguity of the definition, able to cause a disruptive effect on patentability in this area and, as a consequence, on the corresponding downstream research (see, here).

Therefore, not surprisingly the definition of human embryo was again submitted to the CJEU (here). The case originated from the refusal of the UK Intellectual Property Office to register the International Stem Cell Corporation’s application for a patent related to non-fertilised human ova whose division and further development have been stimulated by parthenogenesis. The latter, as the etymology suggests, is a process that can start cell division and development in absence of paternal genes. 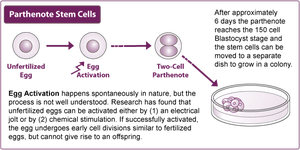 Source: R. English, The spanner of “human dignity” in the wheels of modern medicine, https://ukhumanrightsblog.com/2013/04/22/the-spanner-of-human-dignity-in-the-wheels-of-modern-medicine

According to the Office, the invention disclosed in the patent application was excluded from patentability by the Brüstle precedent. The International Stem Cell Corporation contested the decision before the Chancery division of the High Court of Justice, alleging that the object of its patent application was substantially different from the one discussed in Brüstle. In particular, because, according to the current literature, the stem cells obtained from parthenogenetically-activated ovocytes are not able to develop into a human being.

Hence, the UK court referred a preliminary question to CJEU to clarify the meaning of “commencement” of the process of development of a human being for the purposes of applying Article 6(2)(c), directive 98/44/EC. In a nutshell, what is the standard to determine whether a cell can ultimately evolve into an individual, thus impeding the patentability?

“it was apparent from the written observations presented to the Court that an unfertilised human ovum whose division and further development have been stimulated by parthenogenesis did have the capacity to develop into a human being” (§31, International Stem Cell).

By contrast, in the International Stem Cell Corporation case, the referring Court reported that, at the state of the art, the discussed stem cells cannot develop to term and, therefore, they do not have the inherent capacity of developing into a human being.

On this basis, the Court concluded that:

“an unfertilised human ovum whose division and further development have been stimulated by parthenogenesis does not constitute a ‘human embryo’, within the meaning of that provision, if, in the light of current scientific knowledge, that ovum does not, in itself, have the inherent capacity of developing into a human being, this being a matter for the national court to determine” (§38, International Stem Cell).

In Europe, human embryos are excluded from patentability on morality grounds.

If you want to know more…