Copyright law, as other intellectual property laws, creates a legal exclusivity on the use of an intangible asset. The copyright owner is granted the power to prohibit some acts of use regarding the protected work. In particular, the author can ‘say no’ to the copying of her work. (Copying falls under the reproduction right, but in Europe, the law also confers a right to communicate to the public whose limits are defined by the Court of Justice of the EU; see here). Copyright thus appears as an anti-copying tool. But is it fully correct?

Cartoon by Nina Paley who created the series Mimi and Eunice

This cartoon itself reuses the sentence usually attributed to Pablo Picasso (‘Les bons artistes copient, les grands artistes volent’). It also complements Picasso’s formula: does the right part of the cartoon mean that copyright is blocking everyone to copy – except artists, good or great?

“Immature poets imitate; mature poets steal; bad poets deface what they take, and good poets make it into something better“

T.S. Eliot (who wrote this before Picasso… but this quote has a longer history which is itself a good story about creativity)

The relation between copyright, copying and creativity is a complex one. Copyright is an obvious barrier for copying. But not always. Some have even supported the view that copyright supports copying to some extent. Theories of creativity also support the view that some form of copying is part of the creative process.

But not at school! At least during the tests or exams! 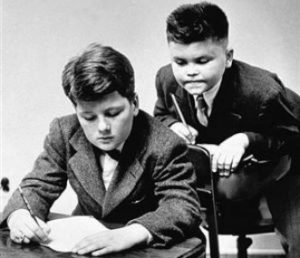 This photo from the University of Nebraska illustrates an article on the Apple v. Samsung litigation

A recent web series called The Game is On!  is worth to be viewed – please watch the episode 1 here called The Adventure of the Girl with the Light Blue Hair. Beware! It contains many leads that might help you to understand how copying and copyright have an uneasy, but strong relation with one another.

“The Game is On! is a series of short animated films that put copyright and creativity under the magnifying glass of Sherlock Holmes, providing a unique, research-led and open access resource for school-aged learners and other creative users of copyright. Drawing inspiration from well-known copyright and public domain work, as well as recent copyright litigation, these films provide a springboard for exploring key principles and ideas underpinning copyright law, creativity, and the limits of lawful appropriation and reuse.”

The accompanying working paper entitled Copying, Creativity and Copyright (Febr. 2016) authored by Ronan Deazley (Queen’s University Belfast) and Bartolomeo Meletti, as part of a CREATe project lead by Prof. Martin Kretschmer of the University of Glasgow, explains well how copying might be part of the creative process.

Please look in particular to the following illustrations discussed in the web series and/or the already mentioned working paper – we will further discuss them in class:

After having viewed the video and read the working paper, could you explain the message in your own words (without copying!) and illustrate it by three examples (other than those mentioned by the authors of those documents). 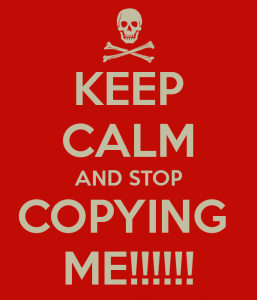