Large promotion and production budgets help movie studios not only to attract the audience but also to secure the most profitable release dates for their movies. This is what Paul Belleflamme and Dimitri Paolini show in a theoretical and empirical research published in the Journal of Economics and Management Strategy in August 2018 (here).

Since the extraordinary successes of Jaws in the summer of 1975 and Star Wars two summers later, the big Hollywood studios have increasingly chosen to release their would-be blockbusters in the United States during the summer period (starting Memorial Day weekend, at the end of May), when a bigger audience is available (because kids are out of school, adults are on vacation, and heat waves drive them all inside air-conditioned theaters). This trend culminated in the summer of 2013 with the release of 31 movies aiming at a large audience. Although summer 2013 outperformed the previous summer in terms of overall box-office revenues, it is not really surprising that an important number of these 31 movies flopped. 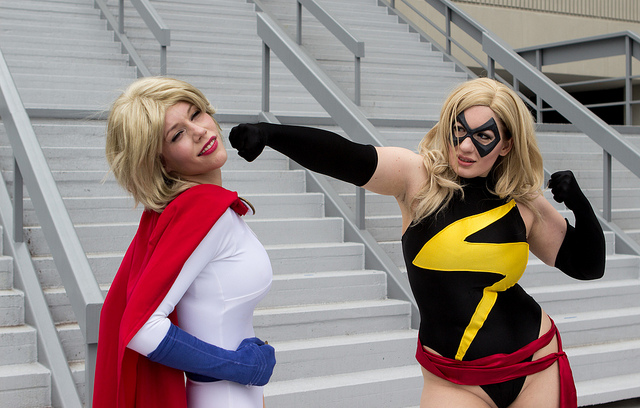 To avoid a repeat of such a congested release schedule and its resulting head-to-head competition, some studios decided to make summer 2014 start earlier: Walt Disney, 21st Century Fox and Time Warner made their potential blockbuster debut in April (respectively Captain America: The Winter Soldier, Rio 2, and Transcendence). They may have been inspired by some previous successful releases that took place outside the summer months (for example, The Hunger Games in March 2012, Gravity in October 2013 or The Lego Movie in February 2014). Yet, even though the scheduling of movie releases looked smarter in 2014, the following summers were congested again.

These events demonstrate that choosing release dates is a major strategic issue for movie studios, which places them in a configuration that resembles a game of chicken: all studios want to have their movies released in periods of large audience (typically, the summer period or the end of the year) and although none of them is willing to yield, they all admit that spacing out releases is preferable.

Release decisions are all the more important that movie studios do not seem to compete in prices. It is indeed observed that ticket prices are generally uniform and relatively stable over time and across locations (see Orbach and Einav, 2007, and Chisholm and Norman, 2012). Prices are actually chosen by exhibitors, in accordance with their own strategic motives. McKensie (2008, p. 80) explains that exhibitors “have an incentive to hold down (relatively speaking) all ticket prices in order to increase the demand for popcorn (and other concessions).” Hartmann and Gil (2009) establish empirically that exhibitors do indeed resort to price discrimination through metering (theaters can ‘meter’ the surplus that can be extracted from a customer by how much of popcorn and other concessions they demand). In summary,

“[w]ith virtually no price competition, the movie’s release date is one of the main short-run vehicles by which studios compete with each other.” Einav (2007, pp. 127)

Other cultural industries share the same features: no (or limited) price competition, demand seasonality and strategic release decisions. Take the case of books, and especially literary works. First, prices are often fixed, either by specific legislations or by industry-wide agreements. This is common in several European countries (see, e.g., Ringstad, 2004, or this Wikipedia entry). Second, the end-of-year holidays are traditionally the period when book sales culminate (see, e.g., Gaffeo et al. (2008) for an empirical confirmation). For instance, in France, this explains why the lion’s share of novels are released during the ‘Rentrée littéraire’, a period that spans from late August to early September (various book prizes, such as ‘Prix Goncourt’, are also awarded during this period). Video games provide another example. The demand also peaks at the end of year, as well as when the school period is over (as reported by Engelstätter and Ward, 2013).

The question that naturally arises is how producers of cultural goods can turn the odds in their favor in this game of chicken. Product pre-announcement may be a strategy. For instance, Marvel studios has mapped out films all the way to 2028. Yet, one can doubt that producers have sufficient commitment power to make such pre-announcements credible. Moreover, if an announcement turns out to be (intentionally or unintentionally) false, the producer’s reputation may be damaged. The derisive term ‘vaporware’ is used to designate such announced products that are released far behind schedule, or never released (here is list of vaporware video games).

Producers of cultural goods must thus find other means to scare off the competition and keep the most profitable release dates for themselves. In a paper that I wrote with Dimitri Paolini, entitled ‘Strategic Promotion and Release Decisions for Cultural Goods‘, we argue that promotion budgets can play this role. We first develop our argument in a simple game-theoretic model, where two producers of cultural goods choose their promotion budget before simultaneously setting the release date of their good. Assuming that the size of the potential demand decreases with time and that the life cycle of goods has a given length, we show that two equilibrium configurations are possible: either both producers release their good immediately (i.e., when demand peaks), or one producer releases its good at the peak while the other producer only releases its good once the life cycle of the first good is over. Interestingly, in the equilibrium with staggered release, the first-mover invests more in promotion than the second-mover (whereas in the equilibrium with simultaneous release, both producers invest the same amount). As a larger budget allows a producer to ‘steal’ part of the demand at the rival’s expense, we see that investing heavily in promotion may allow a producer to credibly secure the most profitable release date for himself/herself. Our model also allows us to identify a number of factors that make staggered release more likely (and, conversely, simultaneous release less likely). In particular, we expect producers of cultural goods to space out more their releases if their goods are closer substitutes (e.g., because they belong to the same genre), if demand does not decay too fast after the peak, and if investment in promotion is less costly. We confirm our argument in an extension of the model in which producers are allowed to reschedule the release of their good once they have observed the investment made by their rival.

In the second part of the paper, we apply our theoretical model to the movie market and we bring its predictions to the data. Using information from Box Office Mojo, we compiled a dataset of more than 1500 American movies released in 10 countries over 12 years (from January 1, 2002 to December 31, 2013). For each movie, the data include the following information: official release date, total box-office revenues, genre, whether it is a sequel or not, studio, and production budget. As the latter variable comprises expenditures such as cast, director, or special effects, we take it as a measure of a studio’s investment in promoting its movie.

Casual observation of our data lends credence to our hypotheses, as illustrated by the figure below. This figure plots release dates (on the horizontal axis) against production budgets (on the vertical axis) for movies released in the US/Canada in 2008; each dot corresponds to one movie and the color of the dots indicates to which genre the movie belongs; the vertical lines correspond to the seasonal peaks. We observe that the movies with the larger budgets are indeed released close to the peaks; we also see that when several movies are released close to a peak, they usually belong to different genres and have different budgets (the dots have different colors and are scattered). 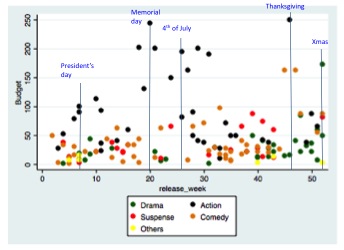 To verify whether movies with bigger budgets tend to be released closer to the demand peaks, we first identify the demand peaks in each season in the various countries. Then, we define our dependent variable as the number of weeks that separates the release date of a movie from the nearest demand peak. As independent variables, we include the budget of the movie, a dummy variable that takes value one if the movie is a sequel of a previously released movie, the sums of the budgets of the other movies released during the same week, distinguishing between movies of the same genre and movies of other genres (the last two variables are meant to measure the influence of competition). We regress this model using an OLS approach, controlling for studio, year, season, and country fixed-effects.

Our empirical analysis largely confirms the predictions of the theoretical model. In particular, we show that movies with larger budgets tend to be released closer to the seasonal peaks. We also find that an increase in the total budgets of competing movies moves the release date closer to the seasonal peak, and that this effect is larger for movies of the same genre than for movies of other genres. A number of robustness checks allow us to establish the validity of these results.