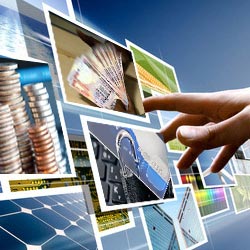 In this third post, we examine how banks can react to the entry threat on banking retail markets (the previous two posts on banking innovations can be found here and here)?

First, banks can decide to innovate by themselves. However, banks have market power, which implies that they face the usual trade-off between the replacement effect and the efficiency effect identified by Arrow (1962). The replacement effect means that monopolistic banks have fewer incentives to innovate than competitive firms because they “replace themselves” when they innovate. The efficiency effect implies that, when competition reduces profits, a monopolist’s incentive to remain a monopoly is greater than an entrant’s incentives to enter a market as a duopoly (see Gilbert and Newberry, 1982).

Banks’ incentives to innovate are also impacted by network effects and switching costs. In particular, a bank must design a strategy that balances the profits earned on its installed base and the profits earned on new customers. Therefore, it faces a trade-off between customer retention and customer acquisition, which is often referred to as the “harvesting versus investing dilemma” (see Klemperer, 1995). An incumbent firm can decide to charge a high price to its installed base to recoup its investment expenditure. However, this harvesting strategy must be balanced against the opportunity cost of losing new customers who will make valuable repeat-purchase in the future (investing). Also, a harvesting strategy can make banks’ vulnerable to entrants’ reply. For example, when Bank of America launched the BankAmericard, it made a $20 million loss. However, this innovation became profitable in the long run (investing).

A way for banks to take advantage of network effects is to build joint ventures or alliances with other banks or entrants. A successful example of joint ventures between banks is the Paylib in France born from BNP Paribas, Société Générale and La Banque Postale, which now reaches 23 million users in France. Cooperation is sometimes crucial for both banks and entrants to reach the critical mass of users and therefore to exploit network effects. The table below shows several examples of partnerships between banks and entrants: 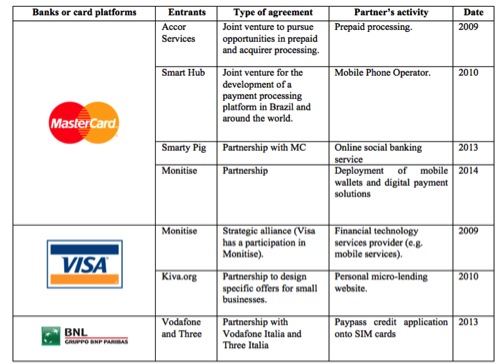 Partnerships between banks and entrants (Mariotto and Verdier, 2014)

Risks also play a role on banks’ strategies. They can be classified into two main categories: risks associated to the transformation activity, and risks occurring at the transaction level for payments or loans.

To understand how the presence of risks can impact banks’ strategies, we focus on the category of operational risks (such as the risk of fraud or information system failure). To face these risks, banks have incentives to invest in security standards to protect their reputation from the negative externalities that could be triggered by entry. But, since the level of investment of entrants is not observable in the first place, banks may have the incentive to underinvest in the level of security standards, and more generally in the quality of the service. But the level of security of a given payment system may be considered as a public good that depends on the level of investment of all the banks and platforms, together with the level of effort exerted by end-users to follow the rules of conduct for their own protection. When one of these players free rides and underinvests in security, or exerts low effort to protect consumers’ sensitive data, a fraud incident causes a negative externality on the other players, through users’ perception of security. In fact, if a player underinvests, the aggregate level of security diminishes and consumers’ adoption of innovative payment solutions decreases as a consequence. Subsequently, this chain causes a drop in aggregate banks’ profits. Because of this information asymmetry and free riding problem, standards and minimum security requirements are set by regulators, or by a collective self-regulatory agreement between incumbent banks. However, if quality standards are set by an industry itself, it is likely that the standards will be too high.

This issue is a policy concern for antitrust authorities and financial regulators. For example, in 2011, the European Commission opened an antitrust investigation into the standardisation process for payments over the Internet undertaken by the European Payments Council. The Commission undertook a careful examination of the standardisation process to ensure that competition was not restricted, for example, through the exclusion of new entrants who are not controlled by a bank. The existing literature on standardisation does not take into account the presence of financial risks in the banking industry. In particular, security standards cannot be modelled exactly as quality standards, because of risk externalities between incumbent firms and entrants.

To conclude, two trade-offs arise when banks react to entry threats: coordination vs. competition with other banks or entrants, and standardization vs. differentiation on the quality of the service.