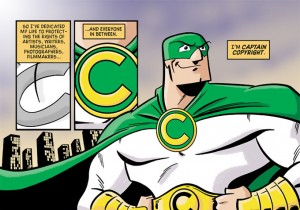 From Wikipedia, the free encyclopedia

A few weeks ago (September 14, 2013), the blog American Thinker published quite a vocal piece, entitled “Copyright Strangulation”, condemning the current scope and length of the US copyright law. According to the author, Mike Konrad,

Copyright law in America gives individuals, and corporations, a paralyzing stranglehold on our culture. Though its proponents claim that it protects creativity, copyright law’s exaggerated length and scope actually chokes off artistic genius and chains our country to whims of few prima donnas who do not represent our culture at all. (…) The stifling effect is enormous. Movies and DVDs are released with altered sound tracks for fear of litigation. More often than realized, creative works are not released at all, because the copyright holder is not even known; and no one dares take the risk.

The following video expresses a similar opinion in a more visual way:

Copyrights have been repeatedly extended

Both pieces are certainly right on one count: copyright protection has been substantially lengthened over the years (see this graph for the US) .

In April 2009, the EU parliament approved an extension of the copyright term for music recordings from 50 years to 70 years (see the official press release). This decision followed a hot debate between the music industry, which campaigned for this extension as it would allow it to extend the flow of revenues derived from music recorded in the 1960s, and a wide array of opponents who were convinced that the measure was likely to damage European creative endeavor and innovation. The opponents’ voice was partly heard by the Parliament as it did not follow the initial proposal from the European Commission to increase the copyright term from 50 to 95 years but settled instead on 70 years.

The proposed extension ot 95 years was designed to match the length of the sound recording copyright in the US, as extended in 1998 under the Copyright Term Extension Act (CTEA, aka Sonny Bono Copyright Act) in 1998. The US extension had also been met with  significant amount of resistance. Some commentators saw the extensive lobbying of Walt Disney behind this extension (see, e.g., this provocative post on  the Technology Liberation Front blog).

What do economists have to say about the design of copyright protection?

The economics of copyright has been first addressed rigorously by Landes and Posner (Journal of Legal Studies, 1989). As they write in the introduction to their paper:

Copyright protection—the right of the copyright’s owner to prevent others from making copies—trades off the costs of limiting access to a work against the benefits of providing incentives to create the work in the first place. Striking the correct balance between access and incentives is the central problem in copyright law. For copyright law to promote economic efficiency, its principal legal doctrines must, at least approximately, maximize the benefits from creating additional works minus both the losses from limiting access and the costs of administering copyright protection.

Rephrasing, copyright protection must balance ex ante and ex post efficiency considerations. From an ex ante point of view, copyright protection preserves the incentive to create information goods, which are inherently public (absent appropriate protection, creators might not be able to recoup their potentially high initial creation costs). On the other hand, copyright protection encompasses various potential inefficiencies from an ex post point of view (protection grants de facto monopoly rights, which generates the standard deadweight losses; also, by inhibiting imitation, the protection might limit the creators’ ability to borrow from, or build upon, earlier works, and thereby increase the cost of producing new ideas).

In his book “Innovation, Growth, and Welfare” published in 1969, William Nordhaus proposed a formal framework to study this fundamental trade-off (which is also relevant for any type of intellectual property rights). Based on this framework, seventeen economists (among them five Nobel laureates) wrote in 2002 that according to them,

“[i]t is highly unlikely that the economic benefits from copyright extension under the CTEA outweigh the costs”  (see the full analysis).

To justify this statement, the economists argued that the revenues earned during the additional 20 years of protection are so heavily discounted that they lose almost all value, while the extended protection of existing works generates immediate deadweight losses (which are even larger when taking the increased cost of creating new derivative work into account). Although the previous argumentation relies on very sound theoretical reasoning, it lacks solid empirical grounds. Stan Liebowitz (professor of economics at University of Texas at Dallas) stresses this point in the report that he prepared for the IFPI (International Federation of the Phonographic Industry) in 2007 and that was submitted to the European Commission:

“there are numerous economic grounds that can be adduced to support a request for extending the copyright on sound recordings. There are clear benefits that will arise from an increase in new creations and the proposed increase in copyright are large enough to lead to measurable increases in new production. While it is also true that there are increased costs, in the sense that copyright allows price to stay above the cost of reproduction, no one has measured the size of these costs to determine how large they are. Nor is there evidence that these costs lead to prices being above a competitive “zero profit” level since the costs of production need to be recouped in some manner. Even if there were some monopoly power, the removal of this inefficiency in the sound recording market would entail treating the creators of the sound recordings, whose talent would be the cause of the monopoly power, more harshly than the treatment given to the many owners of other unique assets with similar efficiency characteristics elsewhere in the economy.”

The debate remains thus open and one can only encourage economists to refine the empirical analysis of the economic effects of changing the copyright term.

And you? What do you think? If you had to weigh the pros and cons of copyright extension, what would you recommend?

(This is an edited version of the post that I published on this blog in September 2010.)