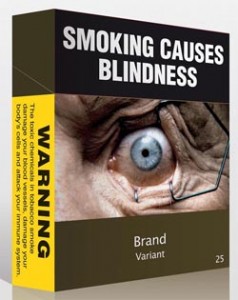 Plain packaging laws impose trademark restrictions and other plain packaging requirements on tobacco products and packaging, as illustrated by the attached photograph of a cigarette packaging where the brand only appears in plain and small font below a rather unappealing photo.

Plain packaging is not a new issue of public interest in the field of intellectual property, and I already posted some comments on this topic here and here again. There are, however, some new developments over the last months: national courts and international dispute settlement bodies are now asked to rule on the compatibility of such rules with constitutional principles either at national level (the protection of property guaranteed by a Constitution) or at international level (the WTO rules, including TRIPs, which are the backbone of the international economic order).

A first court decision on plain packaging was released on August 15, 2012 but the reasons are contained in the judgment of Oct. 5, 2012 issued by the High Court of Australia (see: JT International SA v Commonwealth of Australia [2012] HCA 43). The Court confirmed that the law does not infringe section 51 (xxxi) of the Australian Constitution which empowers the Parliament to make laws with respect to “the acquisition of property on just terms”. Considering that registered trademarks, as well as designs and copyright are attracting the protection under section 51(xxxi), the High Court nevertheless found that the Tobacco Plain Packaging Act of 2011 does not result in an acquisition of property, as there was no gain of a proprietary nature on the part of the Commonwealth of Australia (The resulting space caused by the absence of the trademark was not an accrual of property).

But the plain packaging case is also moving at international level. On September 28, 2012, the WTO decided to establish a dispute settlement panel at the request of Ukraine to study the complaint against measures taken by Australia concerning trademarks and other plain packaging requirements (see here). (Two other complaints against Australia respectively made by Honduras and by the Dominican Republic are still under consultations, see here and here).

In its request for the establishment of a panel, Ukraine said that Australia’s measures “erode the protection of intellectual property rights” and “impose severe restrictions on the use of validly registered trademarks”. Ukraine’s statement also said that “Ukraine considers that governments should pursue legitimate health policies through effective measures without unnecessarily restricting international trade and without nullifying intellectual property rights as guaranteed by international trade and investment rules”. Ukraine’s arguments are summarized in a request of August 17, 2012. Basically Ukraine claims that TRIPS gives tobacco companies a positive right to use trademarks.

It would be interesting to review the TRIPs rules that Ukraine puts forward (Articles 1, 1.1, 2.1, 3.1, 15, 16, 20 and 27)  to support the view that Australia’s laws on plain packaging are not in line with the WTO framework, and to assess the validity of Ukraine’s claim. This is what you are (t)asked to do!

You have to take a clear position and to advocate either that Ukraine’s claim is valid or that it is not supported by the TRIPs rules. Of course, you could also bring additional arguments (in favor or against Ukraine) if you think they are relevant (those arguments might be based on IP or non-IP rules).

Enjoy your trip within the international IP rules!