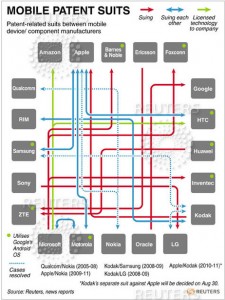 Last Wednesday (April 18, 2012), Lucy Koh, a US District Court Judge, may have paved the way towards a truce on one of the fiercest fronts of what is now commonly known as the “Smartphone Patent Wars”. She ordered Tim Cook and Choi Gee-Sung, the CEOs of Apple and Samsung, to meet and work out their bitter and prolonged patent disputes. The two firms have indeed spent the last months suing and countersuing each other, all over the world, for alleged patent infringements (this infographic nicely summarizes the main episodes of this “battle”).

Accordingly, some players in the market have called upon the competition authorities to sort out the mess. Some observers have been rather critical of the authorities’ abilities to do so. For instance, Yann Ménière recently posted an article on this blog expressing doubts that competition authorities would be able to impose sanctions that address the fundamental problem(s).

Could competition law play a useful role in achieving a truce in the smartphone patent war? Or are there any other solutions that could push the industry back to a path where  consumers benefit more of inventions than patent litigators?

Under what circumstances could the litigation of patents (or other IP rights) become abusive and objectionable from a competition point of view? (In responding, you should refer, where possible, to the ECJ case law and take into account, among others, the fundamental right of private parties to defend their rights before the courts).