The European Copyright Society (ECS) was founded in January 2012 with the aim of creating a platform for critical and independent scholarly thinking on European Copyright Law. Its members include scholars and academics from various countries of the European Union, seeking to promote their views of the overall public interest.

The ECS has recently prepared an opinion which relates to a case pending before the EFTA Court, the Court having jurisdiction with regard to EFTA States which are parties to the European Economic Area (EEA) Agreement (at present Iceland, Liechstenstein and Norway). It concerns an application to register as trade marks the works of the Norwegian artist Gustav Vigeland. After his works fell into the public domain in January 2014, the Municipality of Oslo filed approximately 90 applications for registration as trade marks of signs consisting of visual works and sculptures by Vigeland. The Norwegian Patent Office refused most of the applications on the ground of lack of distinctiveness. The Norwegian Board of Appeal for Industrial Property Rights, before which appeal was filed, decided to request an Advisory Opinion before the EFTA Court.

The key question asked of the Court is whether a work that is in the public domain under copyright law is eligible for trade mark protection. (More information on the case can be found at : www.eftacourt.int ). 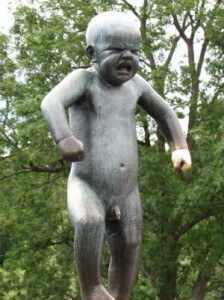 The ECS considers it necessary to comment on this trade mark case because the registration of a work of authorship in which copyright protection has expired could create an undesirable overlap of protection and thus give rise to what the US Supreme Court has called “mutant copyrights” (Dastar v. Twentieth Century Fox, 539 U.S. 23 (2003)).

The possibility to trademark iconic works that are part of culture would disrupt the objectives and balance of copyright protection.

You can read the whole opinion here (its introduction is reused in the text above).