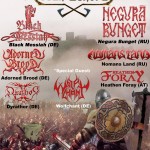 It is under this title that a series of articles (published in the Belgian newspaper La Libre Belgique on October, 19 2013 and prepared by Laurent Lambrecht; see here) wondered if the future unitary patent and unified patent court might attract “trolls” in Europe. “The risk is not negligible“: this is my answer, summarized in the interview available on LaLibre.be (here).

What makes this issue topical is the open letter (26 September 2013) jointly signed by 16 U.S. and European companies, including Adidas, Deutsche Telekom, Apple, Google and Microsoft. This letter criticizes some aspects of the adopted judicial system and suggests some changes to be made to the still to be adopted rules of procedure before the future unified patent jurisdiction.
As a reminder, the term ‘patent trolls’, which refers to small evil creatures from Norse mythology, is used to describe companies that acquire patent portfolios not to exploit them but to negotiate licenses, potentially under the threat of an action for patent infringement  (see the article ‘patent troll’ in Wikipedia). We also speak, more neutrally, of ‘Non-Practicing Entities’ (NPE) for non-operating entities, or “Patent Assertion Entities” (PAE) to identify entities that put their patents into practice through litigation. Such legal actions have proliferated in recent years, as shown in the table hereunder (taken from a White House blog). Some people, like Paul Belleflamme noted in one of his articles on this subject on IPdigIT (What to think of ‘patent’ trolls’?) defend these trolls as they are ahead of other companies in anticipating technological progress. I also refer you to other posts that Paul published on this blog on various aspects of the subject (see here and here). 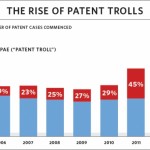 Many observers disapprove the actions of those entities because they assimilate their business model to judicial ‘blackmail’. But can we talk of blackmail when one does nothing but enforce a legal right that one owns? When is a legal action abusive? Couldn’t it be that the problem is just that the patent shouldn’t have been granted in the first place? Behind the abusive behavior of ‘patent trolls’ would therefore lie the question of the quality of the patents granted by the Patent Offices. These are broad and complex issues indeed. But these issues start to be addressed by public authorities, at least in the United States. To a point that President Obama, in February 2013, spoke harsh words against patent trolls: “They don’t actually produce anything themselves. They’re just trying to essentially leverage and hijack somebody else’s idea and see if they can extort some money out of them” (see also the article in the New York Times: Obama Orders Regulators to Root Out ‘Patent Trolls’).

One of the advisers to the President wrote in June on the blog of the White House (here):

When businesses need to constantly worry about abusive patent litigation they are able to put less of their efforts into creating new products and serving customers. Today, some of the largest innovators in high-tech spend more money on patent litigation and acquisition than they do on research and development for new products. Smaller companies are getting hit just as hard, and 40% of technology startups targeted by patent trolls reported a significant impact on their business operations due the suit or threat thereof. It’s clear that the abuse of the patent system is stifling innovation and putting a drag on our economy. The trolling has gotten out of control, and it’s time to act.

As reported in the Financial Times of October 21, 2013 (U.S. Plans to crack down on patent ‘trolls’, access to the article through online registration), bills to limit these abusive behaviours are on the table of the Congress, just two years after the adoption of the Invent America Act, which amended the U.S. patent law rather significantly. Here are some of the proposed measures to fight patent trolls: increasing transparency regarding the NPEs which file those court actions, strengthening the review process of the patents after they have been granted so as to eliminate “bad patents”, reforming the law of evidence (discovery procedure very cumbersome and costly), etc.

But back to Europe. Why does the risk to see ‘patent trolls’ coming increase with the establishment of the system of unitary patent and unified patent court (official texts here)? The main argument has to do with the increased leverage of the future patent: it will indeed be possible to obtain a legal injunction valid on a large market (at least 13 Member States, including the three largest countries: Germany, France and the United Kingdom). Today, court injunctions in case of patent infringement can, in principle, only be effective for a single country (no cross-border effect). But isn’t it the case that the ‘sword of Damocles’ of an injunction already exists in the current system? Can a company that wants to enter the European market succeed if it does not sell on the German market? In any case, as far as the large companies that signed the letter mentioned above are concerned, one can hardly imagine that they can do without the German market to distribute their products and services in Europe. Hence, it is not that clear that the leverage effect will be seriously raised in the future.

In addition, German patent law already features what is known as ‘bifurcation’ (for an explanation, see here); so, the potential risks of this system (reported in the letter) are already present on the key market for Europe.

There are counter-arguments, pertaining, for instance, to the specificity of the US procedure and to the culture of litigation that is well known in this country. As I recall it in the interview, “In the U.S., 60% of cases are judged by a jury (see the statistics compiled annually by PWC.) We do not know which way a decision can go and this puts the ‘patent trolls’ in a strong position to force companies to settle.” In Europe, only professional judges rule on patent cases, thus limiting somewhat the uncertainties caused by juries.

The damages that are awarded at the end of these proceedings for infringement are also much lower in Europe. This being said, the cost of legal defense can be very high in Europe, a fact which may encourage companies targeted by trolls to directly negotiate a license, rather than to engage into a lengthy and costly procedure. To balance correctly the costs and benefits of an action versus a transaction, we need to add to the direct costs (attorneys’ fees, expert assessments, etc.), the time and energy that corporate lawyers and engineers devote to legal procedures instead of pursuing their usual job within the company.

As can be seen, there are arguments going in opposite directions. Ultimately, what do you think? Does the unified patent package seriously reinforce the risk of ‘patent trolls’ landing in Europe? Do you agree with the position defended by the companies that signed the open letter?